As we prepare to face the judges at the Dragon's Den -style contest for GeoVation on May 4th, we're encouraged that more support is continuing to come in.

CPRE (The Campaign to Protect Rural England) work actively on transport matters amongst other issues around the UK.

They have added their support:

"The Campaign to Protect Rural England is delighted to be able to support the CycleStreets GeoVation Challenge bid. We have been working with local communities and parish councils to increase travel options in rural areas as part of our Transport Toolkit project, which was featured in the Department for Transport's Local Transport White Paper earlier this year. Through this work we have found there is a real need for new on-line collaboration tools to help improve conditions for cycling. We believe these innovative proposals would be a huge step forward not just for cycling campaign groups but for others engaged at the local level who seek to improve the range of sustainable travel choices."

Also, the creator of the heavily-used OpenCycleMap map, Andy Allan, has written on his blog about "The Problem of Cycle Complaining" and supporting our bid.

He describes our bid as "a hugely important step forward for all cycle campaigning groups". He hits the nail on the head, recognising the same problems that we and other groups around the country have found, as this extract explains:

If a cycle group want to approach a council to convert one-way roads into two-way, they are unlikely to have the traffic simulations to show the five most useful changes. There’s just a huge gulf in tools and technologies available to each side, so when the only way things work is for one side to suggest and the other to accept/refuse, it’s easier to see where so much reactionary complaining comes from.

Enter the guys behind CycleStreets, with their “Helping campaigners campaign” proposal. You can read it for yourself, but in summary is a web-based tool to track, manage and develop solutions to infrastructure problems facing cyclists. While it’s not a panacea for everything I’ve discussed, I think it’s a hugely important step forward for all cycle campaigning groups. Their proposal has been short-listed for the GeoVation awards finals in two weeks’ time and I wish them the best of luck, the funding from that would really kick things off. If you want to show your support then go for it, through your blogs, twitter or however you see fit. Even if they don’t manage the grand prize I hope to see their proposals come to fruition in the near future, especially given their track record of getting things done. I hope to get the opportunity to help their ideas see the light of day – it will be an excellent tool to help turn cycle complaining into the results we want to see.

CPRE and Andy Allan of OpenCycleMap join other supporters of the bid:

Read their quotes of support in section 10 our full bid document.

If you're free on 4th May, we'd love you to come to the GeoVation Showcase to support us (and vote for us for the additional Community Prize!). It's a daytime event on the south coast, so we're aware it may not be easy for people to come to, but do come should you happen to be free. There are a number of other interesting projects, so it will be a good chance to hear about them and mingle and network with other innovators.

Get your free ticket here: http://geovationshowcase2011.eventbrite.com/

Here's a great picture of many of the people whose ideas got through to the shortlisting stage of GeoVation:

A Cambridge-based project to improve cycling around the Britain has reached the finals of a national funding contest, GeoVation, run by the Ordnance Survey. GeoVation aims to combine Geography and Innovation to help fund ideas which will help improve transport of various kinds. 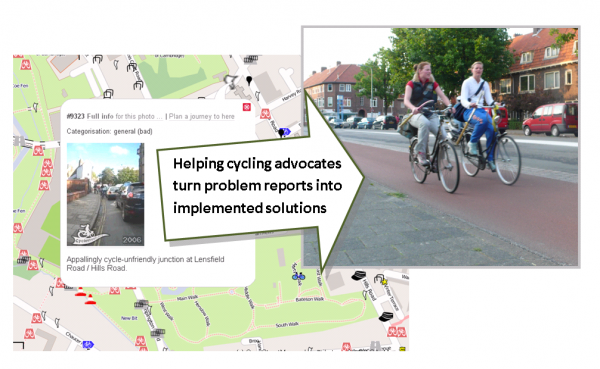 The bid by Cambridge-based CycleStreets, who run the UK-wide cycle journey planner website, has reached the final 10 projects aiming to improve transport in Britain. Over 150 entries were initially submitted, and CycleStreets have succeeded in the initial shortlisting stage and a subsequent workshop event.

The 'Dragon's Den' -style event to select the winning projects will be held on 4th May at the Ordnance Survey's new eco-friendly headquarters in Southampton. This 'GeoVation Showcase' event will select around five winners, who will share a bounty of £150,000, to enable the projects to be developed.

CycleStreets' proposal is for a web-based system to improve the effectiveness of cycling advocacy groups around the UK. These groups aim to get more people on their bikes, by encouraging local councils to create safer and more convenient conditions for cycling. It is designed to help volunteers who care passionately about improving cycling to work together as effectively as possible.

CycleStreets' proposal has the backing of both of the national cycling campaign bodies and a range of groups around the UK, including Cambridge Cycling Campaign. For instance, CTC – the national cyclists' organisation said:

"A webtool for cyclists to help local councils spend their cycling budgets cost-effectively would be a wonderful 'big society' venture, that could yield huge benefits for our health and that of our streets, communities and the environment."

CycleStreets' idea will make use of a variety of information sources, including the Ordnance Survey's boundary and postcode data, collision and planning application information, and OpenStreetMap data.

"There are huge and exciting opportunities for geography to be harnessed to help us all travel in a smarter, more sustainable way, as all our finalists have clearly demonstrated. We're looking forward to seeing the CycleStreets pitch and wish them the best of luck." Last week we took part in the GeoVation Camp at the Ordnance Survey's splendid new HQ in Southampton. It was a fun, if exhausting, weekend.

The purpose of the weekend was for GeoVation to narrow down to a final shortlist the ideas that would go to the final. Our proposal is called 'Helping Campaigners Campaign' (a more catchy title to be determined!), and is aimed at making the work of existing cycle campaign groups be as efficient and effective as possible.

Over the weekend, we, along with the other 20 groups through to this stage of the contest, developed their ideas and prepared a presentation to the judges as well as a 2-minute pecha kucha presentation.

We're pleased to say that we're into the final 10! We'll be attending the final pitching stage on May 4th, and are looking forward to it. If we are amongst the winning groups, this would result in funding of around £30,000 to implement the idea. Several other proposals that we really liked, such as MySociety's FixMyTransport for mobile and a mobile multi-modal journey planner (which we hope would use our routing!) were also through to the final, which is great news.