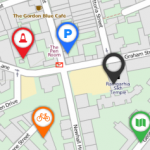 Cyclescape has been used now for three months by Cambridge Cycling Campaign as our test group. We added them even though we knew not everything was in place, as it was important to get good feedback on real campaigning usage, even though that has meant some confusion in the short-term.

Over 180 issues (cycling infrastructure problems) have been posted, over 250 discussion threads on these, containing over 2,000 messages.

We've also had meetings with CTC, Cyclenation, and London Cycling Campaign to show the site as it currently stands and talk through what's done and what's not, to see what they most need: 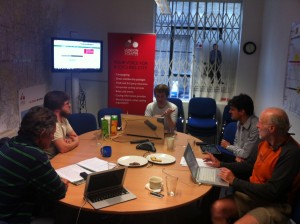 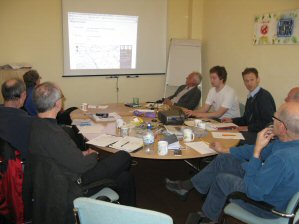 A lot of the work going on now is about tidying up and finishing off pieces of functionality, reorganising things a bit, and making things more flexible. The site isn't quite ready for wider usage, but things are falling into place.

These are the main things left now, not in any particular order, to ensure that the site will be a big step up for campaigners:

A key aspect of the site is to avoid the 'e-mail list syndrome' where everyone gets absolutely everything, which puts off people who don't have enormous amounts of time. Instead, users can outline places they want to hear about things.

a) Three months' usage of the site has clarified what the various settings should now be. This is now being finalised, as top-priority work. [Done]

b) We need a clearer route through to encourage people to set their preferences.

c) The ability to subscribe automatically to discussions based on keywords (e.g. 20mph zones) rather than purely map-based areas. 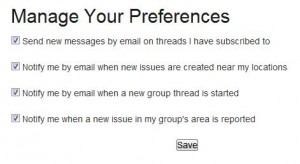 Users have found that the settings don't give them quite enough flexibility yet. The key addition about to be added is auto-subscribing, rather than just being notified.

Much functionality is now in place, but users are having trouble finding things. So:

a) The search box will be moved to a more accessible position and cover all types of data (issues, threads, library) [Done]

b) Reorganising the various listing screens.

d) Tags (categories) just need an auto-complete so that 'cycle parking' comes up as soon as you start typing: p.. a...

e) Getting a more natural (and 'frictionless') connection between an issue (basically the container for discussions) and threads (the actual discussions). In general, starting a discussion on a completely new issue involves a bit too much friction, which we need to address.

f) General little bits of tidying up, improving the labelling and making the site as 'warm' as possible.

This shows three of a number of ways of viewing what's going on. There are more, and we are gaining a better insight into what users need to see to help them campaign.

From the start, it has been a core principle that people can interact with Cyclescape via e-mail as well as the web, much like a Yahoo Group for instance.

a) At present, a discussion thread can't be started by e-mail. A key question is how to ensure this gets grouped with other discussions on a topic.

b) The ability to move an existing thead into a different issue.

c) Finishing off the work on attachments so they can be attached to an incoming e-mail.

The Library is a place for useful resources to be 'tagged' (categorised) so that Cyclescape can automatically suggest them in discussions. For instance, if a 20mph zone is being proposed, it makes sense for the key guidance on this to be handed to people 'on a plate'.

a) Adding to the library isn't a very smooth process at the moment. We intend to enable any reply to be 'promoted' to be a library item retrospectively.

b) More types of library item will make things a bit more flexible and improve how they appear in discussions.

c) Adding the category tags needs to be made more integrated. 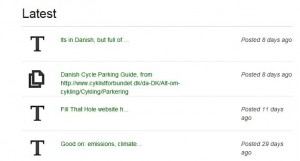 The core Library functionality is there - it just needs a bit more development to ensure it's a genuinely useful campaigning resource.

a) A key need in Cambridge, for which we have grant funding from Cambridge Sustainable City: Getting planning applications landing on the map automatically, something we're very excited about. OpenlyLocal have been making good progress with developing the new PlanningAlerts. We've done some initial work to determine how this will work, interface-wise, to avoid lots of roof extension planning applications (etc.) appearing and cluttering things up.

b) There isn't a listing of My priorities, so there's currently no incentive to set this. Currently you can set this but it's not actually then used. [Done]

Stay tuned for news as these each get ticked off!

Work is continuing apace with Cyclescape, with more features now in place as we work up to a wider release.

There are still quite a number of unfinished areas, but we're getting there. Andrew and (most recently) Andy have been busy adding more in place for us.

Read about these below:

Deadlines (or other dates) can now be set.

Our experience of cycle campaigning is that it's often easy to miss a consultation deadline or some other date, if there's a lot going on. By then, it's too late, and the opportunity to see improvements to cycling are missed. 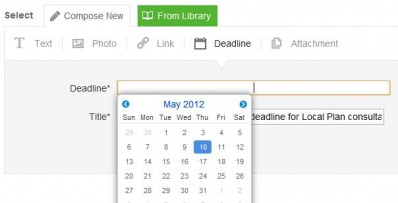 The set dates are now listed in 'My Cyclescape', the user's main summary area. We'll be developing this interface further. 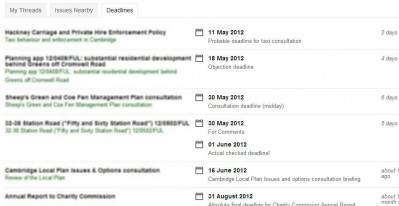 Collision data is now integrated, using a new data feed from CycleStreets, and linking through to their collision reports.

This feature has been developed for the Cambridge group, pushed forward because of the large number of planning applications in that area, for which collision data can often provide a useful context.

Development of this feature, and various underlying code pre-requisites, has been possible thanks to a grant from Cambridge Sustainable City, whose support has been invaluable.

This screenshot, for instance, shows the site of collisions in Mill Road, an area subject to continuing pressures on cyclists from lorries. Several planning applications in recent years would have benefitted from this data being available. 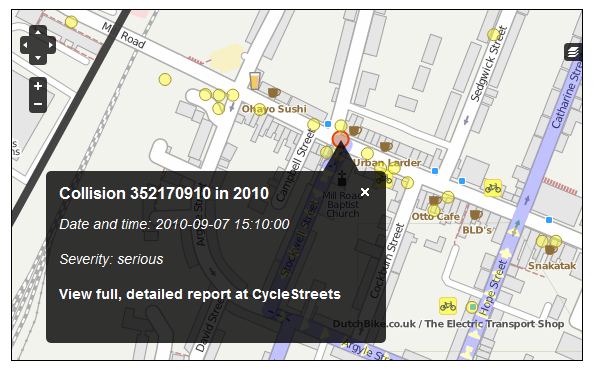 The finalised interface for collisions isn't quite in place yet - buttons for this will be added to finish it off.

Attachments can now be added to individual discussion threads. Previously the only way to add an attachment was to add it to the Library, which is always public.

Currently there is a slight limitation that, if e-mailing to the discussion thread (since you can reply to things via e-mail, not just via the website), attachments do not get through. We're working on this!

There are now three privacy options for each discussion thread:

The latter option means that groups can discuss sensitive matters in privacy if required, e.g. pre-consultation plans from a developer.

There is a setting in the group's area which sets the default (public/group) when their members start a discussion thread. 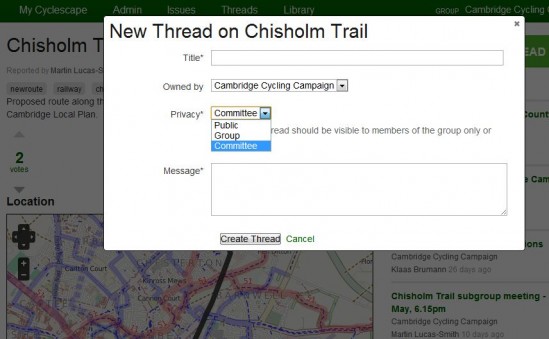 Cyclescape has a voting system, which now results in a list of popular items, ensuring that key strategic issues can stay floated to the top.

More will be done to expose this feature in due course, as the rest of the interface is improved, but the underlying functionality is now in place. 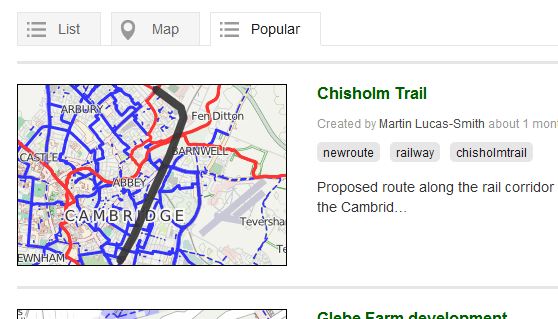 The What's New? link at the end of each page on the site has a log of individual features and bugfixes as they are put in.

Bit by bit, the site's functionality and interface is falling into place!

In our next blog post we'll talk about what we're currently working on, i.e. what's missing and what's not yet finished.